Why are thatched roofs so popular in rural areas? 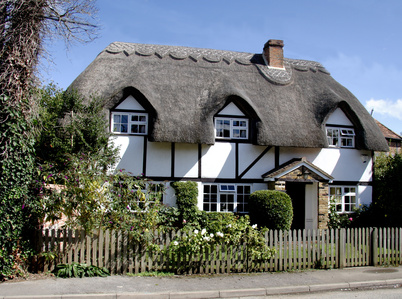 27 Sep Why are thatched roofs so popular in rural areas?

Thatching is one of Britain’s greatest arts. Using thatch for roofing goes back as far as the Bronze Age and a drive through any rural area such as Dunster in Somerset and Great Tew in Oxfordshire will reveal a great number of thatched cottages that wouldn’t look out of place centuries ago.

Thatched roofs were the norm in Britain for over 1,500 years and the main reason for this is that the materials used to create thatch – traditionally broom, sedge, sallow, flax, grass and straw – are very light. This suited the wattle and daub walls of buildings centuries ago because these were not designed to support a lot of weight. Also, because thatch could be made using a wide range of materials, people could simply use what they could source locally to create a water tight roof. This was far more economical than sourcing other materials from hundreds of miles away, because farmers had lots of straw for sale.

Over time as walls became stronger and support beams could take the load of more weight, rural communities stuck with thatched roofs because not only were they functional but they were also considered to be more attractive than other types of roofing. And although thatched roofs were primarily used by the poor in the past, this changed with the likes of the Norman castle (built in the 1300s) in Pevensey, Sussex, featuring thatched roofing across its outbuildings and as grand buildings like the Norman castle took on thatch, other grand buildings followed suit.

Nowadays, rural areas like to preserve their history and thatched roofs are a part of this. In fact, many older buildings are Grade 1 or Grade 2 listed, and any changes made to the exterior of a property – especially a roof – require listed building consent, which is not easy to attain if you are going to alter the original characteristics (thatch) on a property. But while local councils are keen to preserve British history, one can potentially update a thatch roof or carry out repairs, so long as a planning committee grants approval.

Conversely, thatched roofs are very rare in metropolitan areas and cities. The reason being that many of these areas have no history dating back to when thatch was the main material used for roofing, and when these areas were being built up thatch was seen as inferior to more maintainable slate and tile – and slate and tile also allowed new types of architecture to rise, such as skyscrapers and multi-story buildings.

Sorry, the comment form is closed at this time.